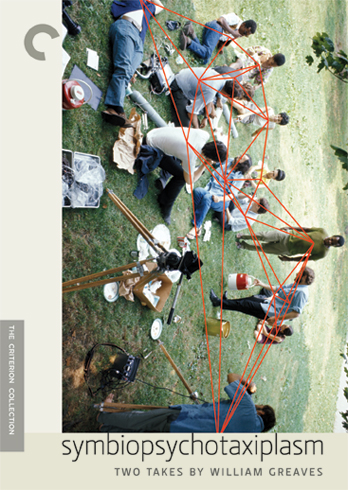 There are two thoughts I have as the freewheeling (though still focused) documentary-drama-experiment SYMBIOPSYCHOTAXIPLASM unreels (which sounds like what Mary Poppins rattles off when on Ecstasy): first, I have to wonder what people who are not critics or film people think of this.  I am a filmmaker (or, to put it in the way Phillip Marlowe replies when he's told "You're not very tall, are you?" "Well, uh, I try to be").  Though not with the same level of equipment - things are more digital today, due to cost and efficiency/availability, when back then all they had was 16mm and nagra sound recorders - the process, of having to out together the scenes piece by piece, is the same.  Only here... well, this IS different, and we'll get to that in a moment.

This is what goes on on a set, more or less, and of course every production is different; what Greaves captures here by letting all the cameras roll that he can is an accurate reflection of many facets of a production: the minutiae, most of all, that feeling of waiting around, of things being out together gradually, whether it's a scene with the actors talking things out, or little technical difficulties, or a police officer coming up asking for a permit or, yes, believe it, when other crew talk behind the director's back about just what the fuck he/she is trying to do. Or not doing, to put it that way. 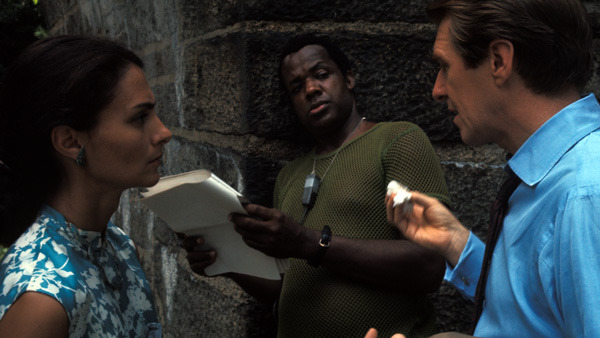 The other thing I thought of was the quote by Laurence Olivier (I wish I could find the link, maybe some day I will) where he spoke about how when a film is being made there's always some documentary aspect about it - that even when you have the most stylized drama with a script, what you're seeing on the screen is a kind of documentary of those actors at the time it was being created.  It's a little deep a thought probably for most people, but I completely get it, and it's easy to see when one looks at take after take after take of the qualities in performances, and also the moods of people, what's going on not with the actors in their character mode but the actors *themselves*.  So what happens in a documentary when a subject is trying to be him/herself?  It's all a performance, isn't it, to some degree?

It's hard for me to be too objective in this review of this experimental film - though I can certainly comment on parts of it, like a few of the interactions between Greaves, who is a director filming a scene of a fight between lovers in Central Park, NY, and his male actor who can't decide whether to play it "butch fag" or "faggy fag" or something along those lines, or a few quips from the crew, tired of Greaves' interesting "non-direction" - but it's something that will hit film people differently than non film people.  Whatever you think about Greaves as a subject, a "character", an "actor" in his own film, he IS directing this scene and becomes a part of it along with the rest of the crew who are on camera (and part of what Olivier said I think is meant to be that once you are in front of a camera, whether you acknowledge it or not, there's something different that you do, unless you're completely unaware a camera is on you, which may be happening more today with sneaky camera phones and more obscure dslr cameras, but I digress).

So it's a difficult film to classify - for all I know watching it today, in 2016 decades after it was shot and assembled together (though oddly enough it seemed to get more of a release in this century, once Criterion got a hold of it and at some festivals, and I'm not sure what release it got in 68) - and yet it's entertaining because of how Greaves cuts between the varying perspectives, of what it's like on set for him doing his directing thing and the actors doing the scene over and over (and at one point other actors come in to do a different scene, or it may be the same scene I'm not sure, one of them Susan Anspach of Five Easy Pieces), and the crew back in their room talking about what's going on, or, especially, NOT going on by a few disgruntled members.

It's a film in search of itself, and sort of satirizing its own making in a sense: if this was some renown filmmaker it might be a different story, but Greaves was, until he passed fairly recently, an iconoclastic, independent artist, (and according to IMDb was once an actor himself).   And what we're seeing put together isn't all of the raw footage - it's assembled in such a way (and, I ponder, a possible influence if Michael Wadleigh saw this before shooting/editing WOODSTOCK with the three-frames-in-one in mind) that is unmistakably on the fly, loose, showing things in such a form that passerbys do come up and ask if they can be in the film. 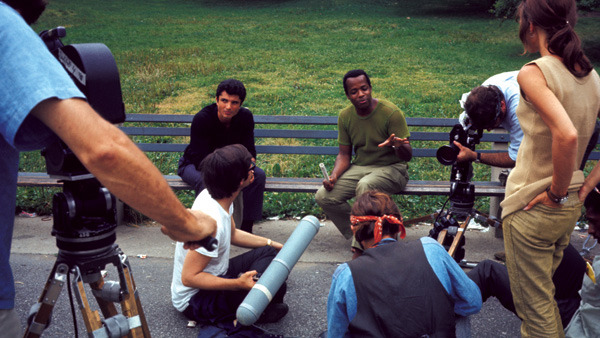 On top of this all, the "fictional" film being acted out is full of the kind of language just a few years before wouldn't get by in a regular theater, and even for 1968 was racy and full of those dreaded "F" words (fuck AND faggot of course), and its anarchic spirit reflects exactly the time it was made.  By the time you get to the 90's this approach isn't gone but it gets put into a different context like Tom DiCillo's Living in Oblivion, which is a fictional film with real-life stuff filtered through parts of it.  In other words, the whole project is akin to the guy next door who decides to become a nudist and let everything hang free and try some acid and do something new... and yet his wife still lives with the guy and criticizes him.

So it's absorbing.  It may shy a little from greatness for me because of losing steam near the end, yes, for a 75 minute film it does.  It's oddly enough from one more passer-by, seemingly a vagrant in not shabby clothes, who comes by the crew during a break and gets into a random conversation with Greaves about where he came from and what his life is like and the guy is only too anxious to talk a lot about this that and the other.  I don't know if this happened near the end of Greaves' shooting and he put it at the end to be chronological, or if he made the decision to put this near the end, but it kind of grinds things to a halt.  And it's ironic because it's a moment that should be part of the fabric of this pastiche of different moving parts and what filmmaking is: seeing people in a fresh perspective and finding what makes cinema special.  But this guy may be, well, acting a bit much, or is such a natural 'character' that he outshines everyone else who come off more like regular people trying to get through the day.  It's the only part that seems to stand out as being, well, too strange for its own good.

But then that's why you watch a movie with this title that's scored to Miles Davis and looks so far under the hood of what makes people make films, why people watch them, for who something may be made, and what it's all worth it for, isn't it?  It's a funky product of its time that couldn't be made today in a world where we're surrounded by images and drama, when people grabbing a camera with little money or resources could do anything they wanted and it seemed... new.


PS: Sometimes it's a funny thing when you come across a movie from another time and someone looks *exactly* like someone you know.  In this film, this guy, playing a guy named Rosen (ironic for me as another close collaborator if mine is named that), looks exactly like Mr. Gabe Rodriguez of the Apple Martini Podcast.  So it goes. 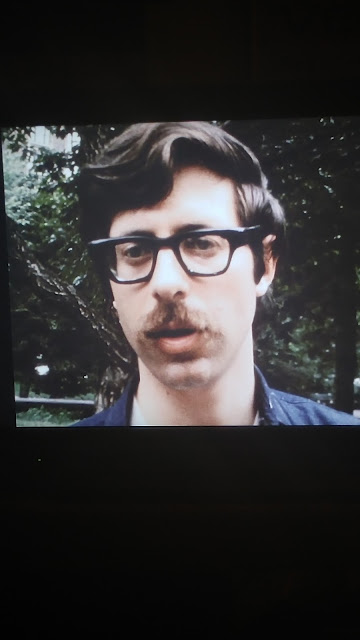 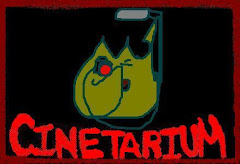 "A movie is like a person. Either you trust it or you don't." (Mike Nichols)

"Cinema is a matter of what's inside the frame and what's out." (Martin Scorsese)

"The longer I work in cinema the more convinced I am that this domain of art is not ruled by any laws. I do not even attempt to find them. Everything is possible." (Andrei Tarkovsky)
"A film is, or should be, more like music than like fiction. It should be a progression of moods and feelings. The theme, what's behind the emotion, the meaning, all that comes later." (Stanley Kubrick)